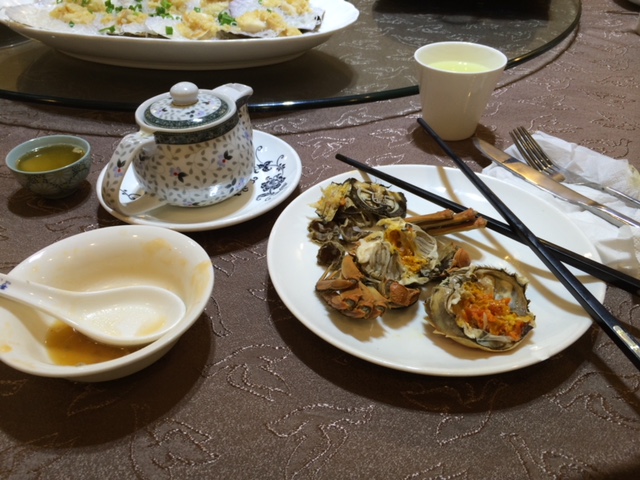 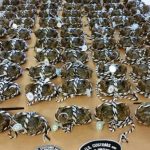 Last month, the United States Customs and Border Protection Agency seized 135 Mitten Crabs in Indianapolis, Indiana.   It has been a long-standing policy of the United States Department of Environmental Conservation to ban the import of live Mitten crabs from China.  The U.S. is worried such an invasion might destroy the native Blue Crab population along the Eastern seaboard.   Last year, this crab was discovered in the waters off Yonkers, New York in the Hudson River.  The crab has a dark green back with golden claws covered in distinctive brown “hairy” fur.

These most-sought after creatures are also known as Shanghai Hairy Crab, or ‘Dazhaxie’ in their native freshwater estuaries northwest of Shanghai.   In the ninth and tenth months of the Chinese lunar calendar, the hairy crab comes to maturity and migrates from its freshwater habitat toward the ocean.   It’s during this time that the crabs are hunted in river deltas and exported as part of a lucrative gourmet industry.  The most coveted crabs are found in Yangcheng Lake in Jiangsu Province. 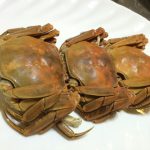 Transportation of baby Shanghai Hairy Crabs from the breeding farms in Jiangsu does exist.  Under a recognized arrangement with Taiwan, experts from the Shanghai Ocean University visit the Taiwan cultivators to inspect the growth of the crabs before being sold at market.

But with greater frequency, the crab farmers back home along the banks of Yangcheng Lake wrap their live crabs with twine and sell them directly to anxious crab aficionados.  These are the crab farmers of Lianhuadao, or Lotus Island.  The farmers also open their homes to tourists as nong jia le, or ‘Happy Farmer Homes’.  Guests are treated to a tantalizing, fresh batch of crab, right at the world’s most pleasurable source.

The love of eating these crabs go back at least to the Tang  Dynasty period of the 8th century when its most loved poet, Li Bai, wrote of the addicting pleasures of experiencing crabs with good wines.  Li Bai’s connection to this delicacy is so famous, the Sheraton Hotel in Shanghai has named its restaurant in his honor.

Traditional Chinese medicine gives good reason why the die-hard crab connoisseurs insist you pair Dazhaxie with plenty of Chinese brandy, or ‘Huangjiu’, made from fermented cereal grains.   Another complimentary wine is the Shaoxing rice wines from the Shaoxing region in Zhejiang Province.  Chinese food nutrition philosophy identifies the crab to be a ‘cooling’ food.  Therefore, to balance the ‘cooling’ effect, one should consume ‘hot’ foods.  Rice wine is a ‘hot’ food. 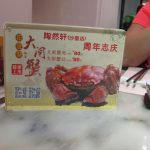 Restaurants serving this delicacy are not limited to Shanghai.  Recently, I was fortunate enough to be introduced to the dish in Ling-Ling’s restaurant in Guangzhou.  Ling-Ling’s kitchen staff steam the crab and serve it with a vinegar and ginger sauce.   Ling Ling taught me the multi-step process to cracking open the crab.  In the ninth month of the Chinese calendar, the round-bellied female crabs  is favored as her roe is said to be sweeter.  But in the tenth month, the male, characterized by the male’s triangular flap, is more desirable. 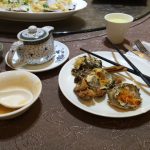 So, as it is hard to find a true ‘Dazhaxie’ in New York, a trip to China for a meal would  certainly be recommended for this tasty treat.  That is if you want to taste something more heavenly than Maryland Blue Crabs!