Covid-19 Emptied the Waters of New York Harbor in 2020

Today’s ninth annual Liberty Cup event saw twenty one boats compete in a feisty End of Summer Classic that had diverse conditions that made the afternoon’s three division races a delightful challenge.  Sailboat Racing is common in New York Harbor; however, organized regattas are not.  The Liberty Cup is the only inter club regatta held in the harbor.  This year, amidst the Covid pandemic, it was the only regatta to be conducted that was not cancelled. The Liberty Cup is part of a 4 regatta series: the other 3 regattas are Bill Volk regatta out of Keyport YC, Red Grant out of Raritan YC, and Blue Water out of Atlantic Highlands.

We should note that the Lady Liberty Regatta is traditionally held every June and the all female event races a J/24 boat design.  Also, the thirty five year old Around Long Island Regatta would have started at Liberty Landing Marina on its’ traditional last Thursday in July.  Its’ eighty plus entries amass in the harbor, travel out into the ocean, round Montauk and Plum Gut, then finish after 209 nautical miles at its home port of Sea Cliff two or three days later.  The ALIR start in New York Harbor is a tip of the hat to its founder, Frank Braynard who co-created the 1976 OpSail that famously filled New York Harbor with international tall ships from every corner of the globe.

Covid-19 Did Allow A Handful of Off Shore Regattas

Liberty Yacht Club’s Commodore David Spence is a veteran of dozens of inshore and offshore regattas in New York and New England waters.  Last week, David sailed the Vineyard Race, an eighty-six year old 238 mile run from Stamford, Connecticut out around Plum Gut, rounds Buzzard Bay horn and heads back to Stamford.  This race takes most boats two days to complete.  After such a grueling schedule of sailing, it is a nice culmination of the sailing season to run the Liberty Cup as a one day event in David’s backyard.  Multiple design boats are invited to compete, thus attracting participating yacht clubs from down the Jersey shore out to the Long Island Sound.  The competitors are within an hour or two of reaching New York Harbor for the scheduled noontime start. 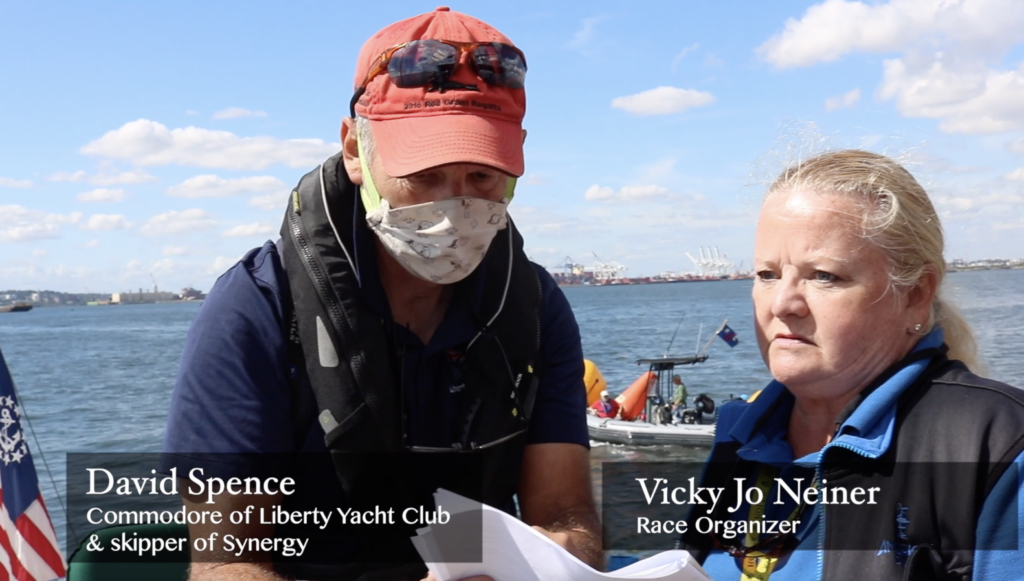 Liberty in the Jersey Flats.  Aboard, the race organizer, Vicky Jo Neiner, begins her measurements and calculations to determine the starting line, the course, and the finish line.  The prevailing winds established the first round of races with the starting horn at 12:45.  The J/105s headed out on a northeast course direction extending toward Governor’s Island where the boats tacked to the northeast and back.

As the afternoon wore on, tricky winds shifted from the South-Southeast to the Southeast-East, changing the course direction of the third round of races.  The boats were directed out toward the Bay Ridge Flats in the Lower Bay, closer to the Verrazzano Narrows where they rounded the marker and tacked back toward the finish line.  Currents were of course a factor and as expected, the slack tide turned and the flood created interesting conditions.  The sound of skippers shouting instructions to their fully crewed boats off in the distance were heard prominently on the Race Committee boat throughout the day.  Needless to say, the races were spirited!

The Importance of a Seasoned Race Committee

With VHF radio in one hand and flagpoles in the other, Vicky Jo Neiner was 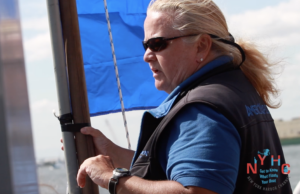 responsible to accurately start and finish each division race.  Reliant on the volunteers who switched flags, blew the starting horns and whistles, posted the charts, coordinated the Zodiac marker buoy boat, and broadcast notifications of approaching mega-ton vessels, Vicky was the glue that made each race a success.  A professional working captain, Vicky has 50 years of maritime experience and an avid competitive sailor.  She is a member of US Sailing. Interesting fact: The Zodiac mark boat was donated by a local dive service company “Dive Tech” Owned and operated by John Pommerehn.

Assisting Vicky was Kelly McIntyre, the Statistician who calculated the handicaps and recorded the finish times of each boat.  Kelly is a member of the Liberty Yacht Club and crewed for David on Synergy at the 2020 Vineyard Race.

The Race Committee Boat Captain and Vice Commodore of Liberty Yacht Club, James Chambers, kept control of his Pearson trawler.  A lifelong seaman and veteran of multiple maritime occupations and vocations around New York Harbor, Jim Chambers knows everyone on the water who you might need to know when organizing a harbor event.  Everything from contact with local tug captains and especially those at the wheel of the Staten Island Ferry, all require professional courtesy and some finesse.

The Anticipated Hazards of the September 12th, 2020 Regatta. 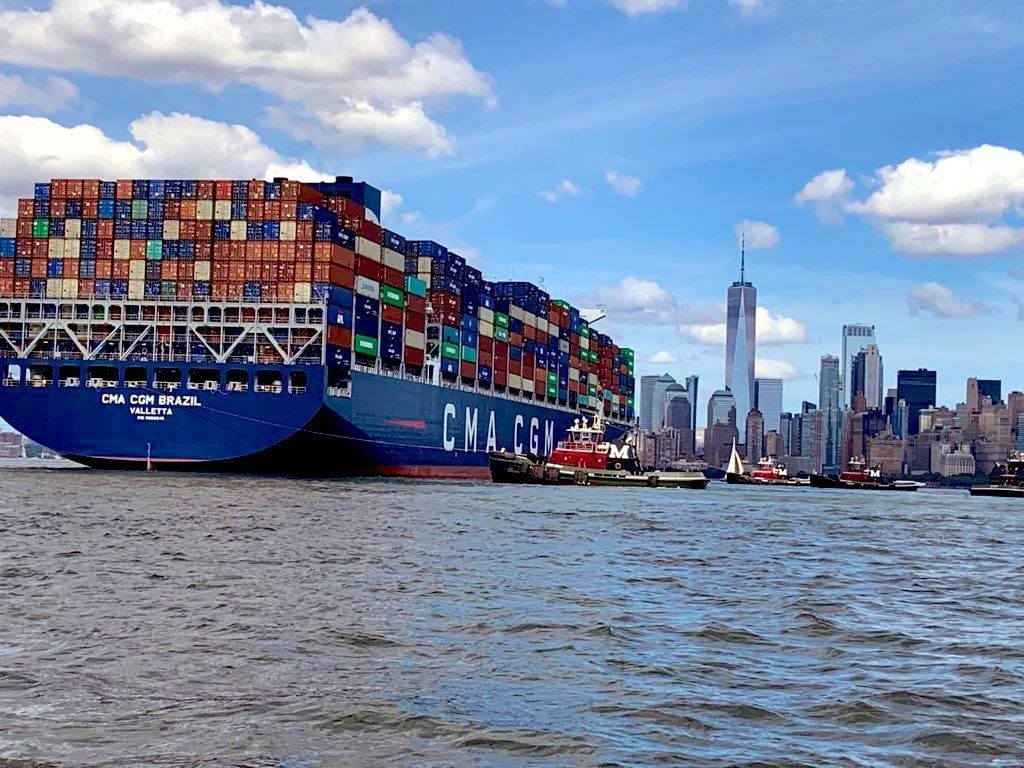 Aside from the normal tug and barge traffic that fills New York Harbor, the steady passing of the Staten Island Ferries is always a challenge to the race participants in the harbor.  The sounding of the 5 horn blast from the captain’s wheelhouse is one to be avoided. The ferries did slow down as they approached the course area.  But today was marked by a historic occurrence in New York Harbor.  Her name is the CMA Brazil.  She was completed this year and is registered in Malta. Her voyage started from Sri Lanka, passed the Suez Canal, left Halifax Nova Scotia yesterday and became the largest Super Container ship to enter New York Harbor. Unbeknownst to all, the Brazil did not make the typical ninety degree turn into the Elizabeth Channel.  Prior to the ship’s scheduled berth at Port Elizabeth, a photo-op in front of the Statue of Liberty was arranged despite David’s notification to the Coast Guard of the regatta sailing zone.  Thanks to Captain Jim, who spoke directly to the USCG Vessel Command Center, the ship and the Moran tender tugs did slow down to allow the regatta racers to safely pass in front of the approaching vessels.

Despite Captain Jim’s best efforts to know every inch of activity in the harbor, a sudden unforeseen triad took shape in the middle of the race course.  As the Brazil was being towed back down the harbor from the Statue of Liberty flanked by the assigned three Moran tugs, the ship now sat idle in the middle of the regatta course.  Amidst helicopters, Coast Guard craft, and police boats, this stalled parade took center stage.  The unexpected event was complicated by a garbage barge emerging from the Constable Hook Reach, probably departing from Staten Island waste management facility.  And in the distance, the approaching Staten Island Ferry.  Convergence at one point created this incredible bottleneck.  From the top deck of the Race Committee Boat, it was like watching floating chess pieces moving into a global positioning chessboard.  This was much more than a 5 horn blast that we were warned about!

Capt Jim contacts the USCG vessel traffic service hoping that the duty officer’s could untangle the knot.  Captain Jim lowered his radio and said the Captain of the Brazil had ultimate say regarding control of the situation.  The race could have been shut down.  Vicki announced to the boats there was a temporary pause in the race.  The racers stared at the picture before them.  This was a historic moment crossing their paths.  We all sat watching acrobatic maneuvers of the triad of Moran tugs as the tremendous tow lines exaggerate the tension.  The majority of the boats turned into the wind to stop forward motion.  From the Committee Boat, the sailboats were suddenly idle.  What were the regatta racers thinking?  A forced pause to contemplate life?  Was this another layer to add onto he effects of Covid-19?  What would the future bring? Other more pragmatic thinkers holding onto a planned strategy to win this race?

Vicky holds the boats in position.  The Coast Guard duty officer holds the future of the Liberty Cup in his hand.  What is in the cards?  Thank goodness, a reassuring voice over Captain Jim’s VHF radio clearly speaks of a plan.  Once the garbage barge is well into the Narrows Channel, the Brazil will continue its relocation into the Lower Bay. The situation slowly resolved itself.  Jim instructs Vicky who instructs the racers that the regatta continues. 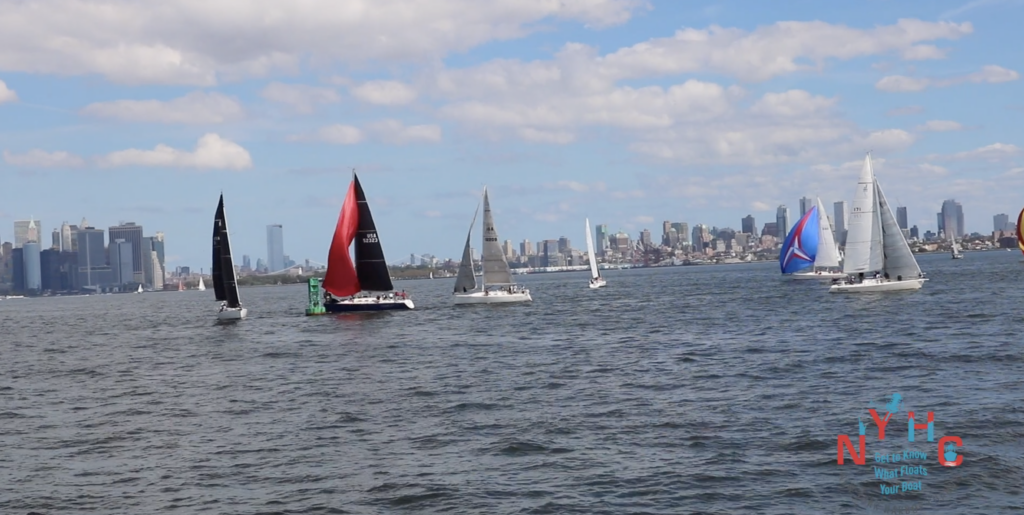 In the One Design Division, eight J105s competed.  Varying wind conditions affected the outcome as rounding the markers found a lead boat loosing four positions within a minute’s time.  The J105 pack experienced varied results all taking turns for first in four races.  Jeremy Macan’s Hornet won the day, successfully placed either first or second in 3 out of the 4 races.

In the Spinnaker Division, Thunder, skippered by George Harrington, topped the class by taking first place in all three races for this division.  Aviato and Overlap jockeyed for 2nd and 3rd place finishes all day.

Synergy had a rough series of starts but ended on a high note with a 2nd place finish in the last race.

2021 will mark the 10th edition of the Liberty Cup Regatta. Expect to see the show go big with its traditional post-race BBQ, party and awards ceremony, and two days of racing. Like 2019 we expect 5 classes of boats with even more participants. We may even hit 50!