As New York City gears up for the annual Veteran’s Day Parade down 5th Avenue, venues around the world are honoring the U.S. Veterans for their military service.  Fallen U.S. soldiers are also remembered at the eleventh hour of the eleventh day of every year.  The laying of the wreath at the Tomb of the Unknown Soldier at Arlington National Cemetery has always been the standard bearer for the Missing. 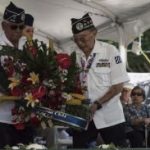 Recognition Day.  The featured ceremony takes place at the National Memorial Cemetery of the Pacific in Honolulu Hawaii.   And rightfully so.  The waters of Hawaii’s Pearl Harbor hold hundreds of missing servicemen that were killed as the Navy ships exploded and sank during World War II.
Yet, there is a glimmer of hope for the nation on this most solemn of days.  The Defense POW/MIA Accounting Office (DPAA) is a federal agency established specifically to identify as many of the 82,000 missing in action service members as is possible.  Procedures are painstakingly slow; step by step and day by day.  But results do happen.  In some cases, it has taken more than a decade.
Earlier this month, DPAA Public Affairs Department prepared an official release stating Navy Seaman 1st Class Kirby R. Stapleton was listed as “accounted for” after positive identification of his remains successfully linked his DNA to his family members.  You can read more of the details of this solved case on the DPAA Public Affairs website.
The tireless work of DPAA teams are producing astounding results not only through DNA matching, but also with the help of an arsenal of highly sophisticated forensic archaeological tools.  These are at the forefront of many investigations be they underwater or in remote land-based recovery zones. 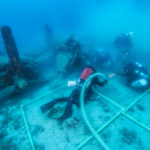 On January 31st of this year, DPAA announced the successful identification of First Lieutenant Eugene P. Ford, the pilot of a  World War II B-24 bomber lost in Corsican waters in 1944.   It was reported that three missing airmen went down with the bomber.  The sea floor was examined until tooth and bone were found in the underwater debris field.  The research team recalls it was a wedding ring found miraculously by vacuum sifting through the deep silt that propelled the continued search.  Ford was the only married airman of the three.  Lieutenant Ford will be interred at Arlington National Cemetery.  Sergeant Charles Priest and First Lieutenant Russell Landry are still reported as Missing In Action.
DPAA is preparing years in advance for a workload of ongoing investigations.  Unsubstantiated reports of crash sites, from eyewitness statements or from tales told by villagers, are suddenly shedding life on file after file.   Each case is arduously reviewed and placed in priority order based on the likelihood of recovery.  Protocol is always followed and urgency is not the guiding rule.  Adherence to science, technology, recovery methods, and back office paperwork is proving to be the key to lowering the number of MIAs, day by day, step by step.  In an interview with Popular Mechanics, DPAA Director Kelly McKeague said, “Here we are, 70 years later, where we are actively pursuing making this right. We send men and women off to war. It’s our obligation, should they go missing, to be brought back home.”

RUTH BADER GINSBURG’S LIKENESS TO FACE OFF WITH NEW YORK HARBOR’S OTHER LADY OF...

Milestones Marc Hittner - September 23, 2020
With the unfortunate passing of the legendary Ruth Bader Ginsburg, what better way to honor her than having a tribute statue of her in the Brooklyn Bridge Park? Here's where we need YOUR HELP! Comments below and tell us which option you would like to see the statue in. For more information go to : www.NewYorkHarborChannel.com