Home Current Events A Salute from the Harbor at the P.O. Hoban Memorial Run
Facebook 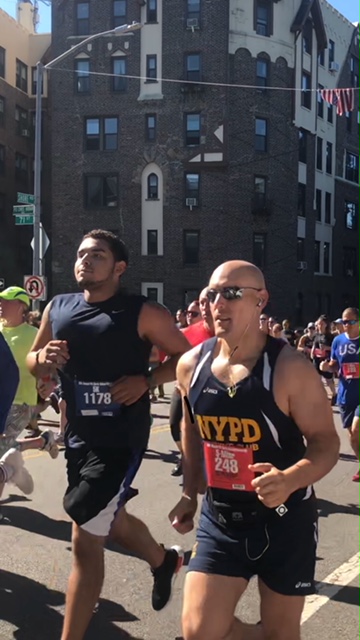 A crisp, sunny day along Shore Road Park in Bay Ridge, Brooklyn marked the 30th P.O. Hoban Memorial Run on September 16th,2018.   The third Sunday of the month is set aside for Police Officer Chris Hoban who was killed in the line of duty at the age of 26.

The race begins and ends at the steps of Xaverian High School, Chris Hoban’s alma matter. This neighborhood event has become a Bay Ridge staple, not only for the school students, teachers, administrators, and clergy.  Outside, a dozen units from the NYPD are represented.  K-9 units and equestrian patrols color an already glamorous display of banners, flags, and balloons.   Also present were many local dignitaries from New York City and State Councils, Assemblies, and Senate.   A few thousand spectators and supporters are in attendance. 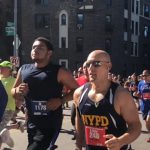 The starting gun sounded and the race was off at 10:30.  The pack of approximately 600 participants proudly wore their race numbers as they passed the handful of band members from the Xaverian Pipe and Drum Group who took position at the foot of the 69th Street Pier.  The five mile course took the runners down the length of the Harbor Promenade along the waterfront, turning back under the long shadow of the Verrazzano Bridge.  Harbor marine vessels from NYPD and NYFD filled the bay, all there to salute the slain Brooklyn officer.  The NYFD boat, Fire Fighter II, steadily pumped fifty thousand gallons a minute into the air, giving a magnificent backdrop to the course.   The spray from the water canons was most impressive. 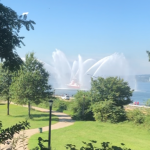 The faster finishers accomplished the five miles well under an hour.  The run remains a small community event, not associated with the larger New York Road Runner races. but the course certainly acts as a primer for those in training for the upcoming Marathon that starts a stone’s throw from 3rd Avenue and Shore Parkway on the Verrazzano Bridge.

June of this year at the NYPD Harbor Patrol dock in Sunset Park Brooklyn. NYPD Commissioner James O’Neill was on hand for the ceremony mentioning how the families of fallen officers will always be remembered for their service.  The new 44 foot launch, will not only be utilized for counter-terrorism activities, it is designated to be the official Presidential vessel to ferry the President, and other officials, around New York Harbor when they arrive in town. 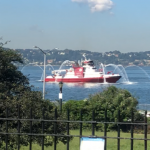 Bay Ridge awaits next year’s 31st Memorial Run to keep Chris Hoban alive and always in our thoughts.  On September 15th, 2019, out-of-town visitors are welcome to find their way to the Pier 69 ferry dock operated by New York Waterways to get a true taste of Brooklyn life along the multi-cultural avenues filled with shops and restaurants of various delicacies.  Shore Road Park is home to the Narrows Botanic Garden where local volunteers are always busy maintaining the pristine assembly of exotic species and flower varieties that line the pathways.

For more details for information about the event or to register to run the race, visit  Hobanrun.com.