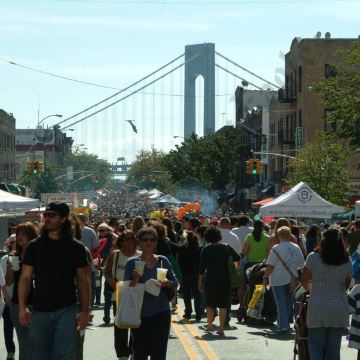 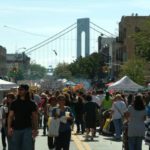 This year, the winds blowing from the Verrazano Narrows filled the air with a misty layer of political voices coming from competing party camps.  Marty Golden, Andrew Gounardes, Max Rose, and Dan Donovan were all well represented by supporters, colorful fliers, and abundant handshakes.  Remind you, Election Day was a little more than two weeks away.

Every block had a musical artist singing popular songs of distant generations.  But it was the lyrics of protest songs of the 60’s sung by solo acoustic guitarists that prominently took center stage.  Politics and music were making definitive statements.  You couldn’t help but notice winds of change blowing down Third Avenue.

Kudos go out to Chip Cafiero, the veteran organizer of the Festival who not only populated the streets with the steadfast local merchants, but recruited non-profit organizations and New York City agencies to engage the crowd.

Regardless of who wins the election, Brooklynites will always enjoy their diverse selection of spanikopita, hummus, congee, soda bread, borscht, burritos, bagels, vegan dishes and pizza.  Ethnicities, customs, and culture define Third Avenue as they seemlessly merge and mingle into one happy community that welcomes all.  Brooklyn does welcome all.