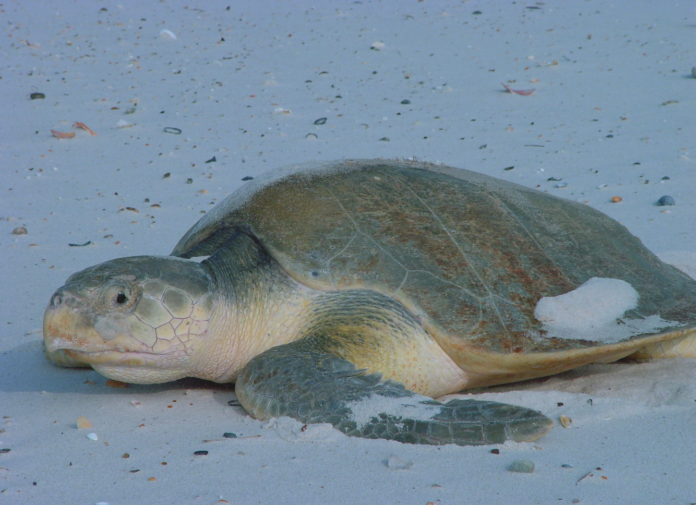 This week, a 50 pound Loggerhead was rescued on Cape Cod.  Loggerheads are not generally found this far north at this time of year.  And earlier this month, the New England Aquarium’s animal care team received three Kemp’s Ridley turtles.  All suffering from hypothermia, this condition is called ‘Cold-Stunning’.  Turtles, being reptiles, are cold-blooded and an extreme decline in temperature will cause this ordeal if sea turtles are unable to or prevented from moving to warmer waters.

It is not uncommon for the Wellfleet Wildlife Sanctuary to rescue at least 600 sea turtles a year.  As the sea turtles travel south along the U.S. coastline toward the Caribbean, they leave Canadian, New England, or Massachusetts waters.  Some of the migration pack get trapped by the Provincetown hook and swim further inside Cape Cod Bay.  Thanks to the quick action of the volunteers at Wellfleet, the aquarium staff rehabilitated all three back to health.

Sea turtles require our help during the fall and winter months.  Cape Cod is not alone.  Other not-for-profit organizations such as New York Marine Rescue Center and the Atlantic Marine Conservation Center are dedicated to patrolling and rescuing turtles on Long Island beaches.  And along the New Jersey shore, the National Oceanographic and Atmospheric Administration (NOAA) Fisheries Division established the Sea Turtle Stranding and Salvage Network.  Those of you who will walk the beaches and estuaries over the next couple of months may stumble upon a distressed turtle.  The best course of action is to contact the emergency rescue phone numbers to learn what to do.

Kemp’s Ridley turtles are endangered and although it cannot be confirmed if there is a direct connection between these cold-stunning incidents and interaction with fishing boats, trawler net entanglement remains the number one culprit for sea turtle trauma and mortality.  Let’s turn our attention to this critical man-made danger that affects all ocean mammals and sea life in general.  It is important to remember that where there are turtles, there is shrimp.  And where there is shrimp, there are shrimp boats.

Shrimp trawlers are an iconic fixture in harbors around the world. They offer an idyllic backdrop to many serene seascapes that commonly adorn our home interiors.  But shrimp trawlers are far from romantic when they catch sea turtles in their nets.  A typical 100 ton trawler requires an engine capacity of 500 horsepower.  The trawler is identified by the characteristic outrigger boom that spans 30 meters across.  The winch and deck machinery at the aft of the ship is generally boxed into a 6 to 8 meter square. The configured elements of the trawl include rope, floats, chains, and netting.  The trawl netting is either dragged along the seabed where shrimp are found in the mud or sand, or the netting is pulled midwater. Each of these devices pose a threat of entanglement.  Shrimpers operate globally, fishing warm-water and cold-water species.

Today, NOAA and many marine mammal advocacy groups such as Oceana, wait for Wilbur Ross, Secretary of Commerce at the Department of Commerce (DOC), to approve and implement stricter proposed regulations for full utilization of Turtle Excluder Devices (TED).

These modifications to the fishing trawler nets will help prevent thousands of sea turtles from being entangled.  Meanwhile, preservation measures sit at the door of the DOC.  In fact, Oceana has sued the Trump Administration in 2017 for violating the Endangered Species Act (ESA) stating the government faileding to adequately consider the harm to sea turtles by shrimp fishing.  Proactive efforts abound in a general initiative to save the endangered sea turtles with relatively little additional financial impact on fishing trawler operators.

The current administration is tabling an otherwise fast-track bill that has support from a
multitude of agencies.  Are we facing Turtlegate?   This past August, the Trump administration stripped protections from the ESA to favor companies who could take advantage of reduced environmental regulation such as offshore oil drilling.  The Department of Commerce (DOC) holds the key to unlock this door to Turtlegate.

Entanglement spawns a phrase commonly used by trawler operators.  It is called “bycatch”. A quick search on the internet finds three good definitions:  The Merriam-Webster Dictionary defines bycatch as “the portion of a commercial fishing catch that consists of marine animals caught unintentionally.”  The Free Dictionary defines by catch as “unwanted marine creatures that are caught in the nets while fishing for another species; “thousands of dolphins, porpoises and whales are killed as part of the by-catch each year”. Then Wikipedia defines Bycatch as, “in the fishing industry, is a fish or other marine species that is caught unintentionally while catching certain target species and target sizes of fish, crabs etc. Bycatch is either of a different species, the wrong sex, or is undersized or juvenile individuals of the target species.”

Advocates for marine mammal preservation have always been aware that efficient gear is attractive to fishermen only if effective fishing practices calculate their marketable catch.  Obvious goals over the last four decades have been a) to keep shrimp catch high and bycatch low, b) modify fishing gear to achieve ecosystem objectives, c) design a new trawl, and d) increase the selectivity of fish species. The Bycatch Reduction Device (BRD) has been a standard since it was first designed by a Norwegian fisherman in the 1980’s.  It is a metal or wooden grid, essentially creating a door in the nets.  Although primitive, the BRD was a step in the right direction and adapted quickly around the world.

With further research, we found this report filed by Wes Wolfe of the Brunswick News published on January 6th, 2018.  “TEDs are a bit of home-grown Georgia ingenuity. Georgia shrimper Sinkey Boone, of Darien, legendarily developed the first excluder device in 1968 with an eye to keep cannonball jellyfish out of his nets. In 2012 the federal government certified another of Boone’s creations, the “Georgia Jumper Big Boy,” which was developed to keep out leatherback sea turtles and allow for other sea turtles to make an easier escape. It was to also help reduce bycatch of creatures like horseshoe crabs, finfish, rays and sharks.  The Boone family worked with the UGA Marine Extension and Georgia Sea Grant to put the TED into work.”

The turn of the 21st Century was marked by the alarming escalation in the mortality rate of endangered ocean mammal species. 2001 was a turning point with a landmark study at The United Nations University Fisheries Training Program in Reykjavik, Iceland.  A collaborative effort ensued to target the location of the greatest number of sea turtle incidents.  Mexico’s coastal waters were ground zero.

Experts in marine biology utilized mathematical formulas to create a variation of trawl net sizes needed to take the individual species into consideration.  However, researchers working with local Division of Marine Fisheries of Wilmington Harbor would say. “what works in Iceland doesn’t necessarily work in North Carolina”.  The resulting study would be increments of the mesh size.

Presently, trawl configuration has adapted multiple separator panels such as “Square mesh windows” and “extended funnels” based on the Icelandic Shrimp trawl designs.  Trawl nets were made of nylon and polyethylene.  Fibre technology created Dyneema that is a much stronger fibre as well as being much lighter.  The use of magnets reduces towing resistance.  But above all, the “Turtle Excluder Devices” (TED)  has been the most significant promising advancement to guide turtles safely out of the trawl.

The Hull Truth: Regulations and Enforcement

The trawlers operating in the North Atlantic are under intense scrutiny this year.  NOAA is responsible for the fishing regulation rules and technical data that all ships operating in U.S. waters must abide by.

The United States Coast Guard is empowered to impose enforcement and implementation of NOAA fishery regulations.  This summer, after completing New York Fleet Week this past May, the USCGC Campbell was delegated to a 90 day assignment to inspect fishing vessel equipment, quotas, and proper operations in the Atlantic between New York and Canada. 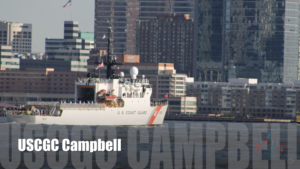 The USCG is committed to the safety and the safe fishing practices of marine mammals as part of the cirriculum of its Northeast Regional Fisheries Training Center .  Living Marine Resources (LMR) is an essential credo of USCG. The educational arm of NOAA cannot be ignored as it is a leader in marine research and study concentrating on every aspect of marine sea life preservation.

Fishing net entanglement is not restricted to sea turtles.  Recently, the most endangered of the whale species had one of the less than 500 remaining North Atlantic Right Whale population floating dead off Jones Beach, Long Island.  The whale known as ‘Snake Eyes’ died with no gear attached to his body, but scientific laboratory inspection detected traces of netting and the necropsy identified entanglement as the cause of death.  No less than 7 of this endangered whale species have died as a result of lost or detached fishing gear in Canadian waters.  Sadly, the whales continue to migrate south after the initial incident until they succumb to their injuries.